Use of Optimization in Turbomachinery Design Process

With the advancements in computation power, optimization is not just limited to academics and research anymore. It can now be realistically used for industrial designs. There are several optimization software available in the market which utilize various powerful optimization techniques but not every software can be practical for industrial applications. This is especially true for the turbomachinery industry. Turbomachinery design is coupled with aero and mechanical optimization. The problems are highly constrained and usually involve non-linear functions. The optimization algorithm needs to be efficient to handle such problems.

AxCent acts a parametric modeler in this environment and generates the necessary files needed for meshing. FINE/Design3D uses the optimization kernel, MINAMO, developed by CENERO based on the Design of Experiment (DoE) technique. MINAMO uses the advanced space-filling algorithm – Latinized Centroidal Voronoi Technique (LCVT) to generate the designs. The exploration of the design space is greatly sped up with a surrogate-based optimization technique. The surrogate model in combination with global optimization approaches (such as Evolutionary Algorithms) then uses an iterative process to find the global optimum.

Engineers at Concepts NREC used AxCent and FINE/Design3D to perform a multi-point optimization of a radial compressor [1]. The base case was designed using a standard 1D manual design process based on the design requirements shown in Table 1.

As seen from Figure 1, the base case does not meet the design requirements at speeds 120,000 RPM and 170,000 RPM. Design points 1 and 2 are shown in blue and yellow dots, respectively. 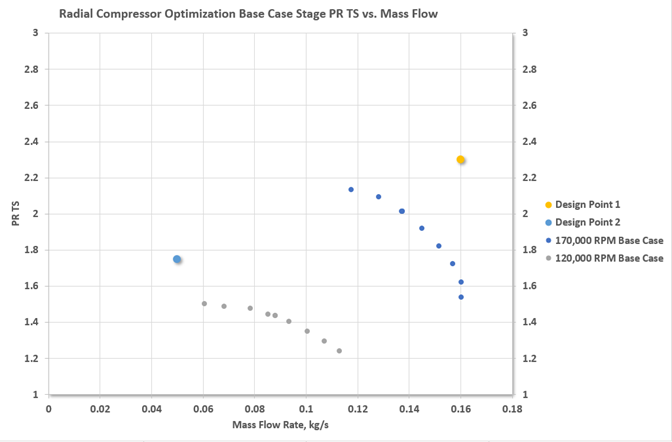 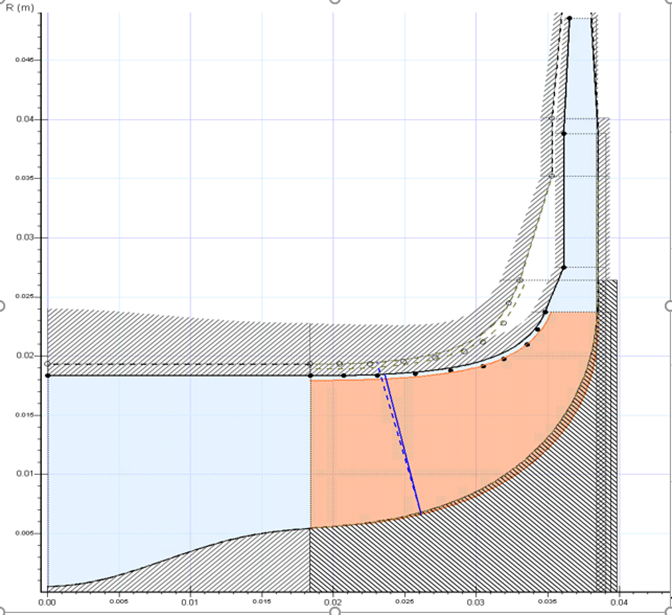 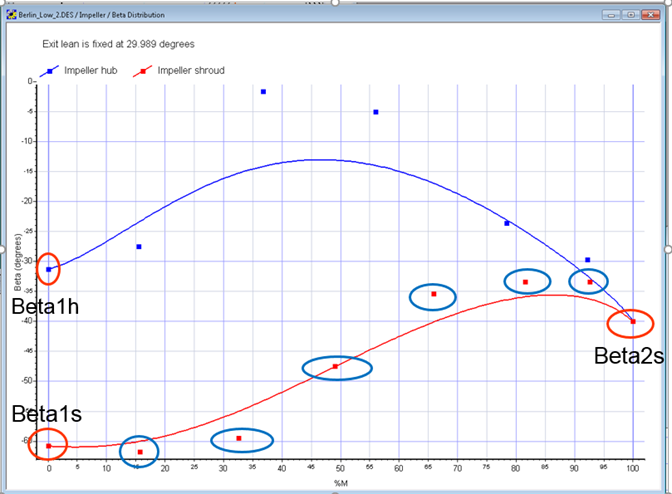 After setting the upper and lower bounds for the input variables, a DoE of 51 designs including the base case was generated by running FINE/Turbo CFD solver to ensure there is an appropriate number of designs. The Latinized Centroidal Voronoi Technique (LCVT) was used as a space-filling algorithm to generate the designs.

The pressure ratio TS and Efficiency TS are the relevant responses from the DoE for both low and high flow rates. Figures 5 and 6 show the scatter plots for the same respectively. 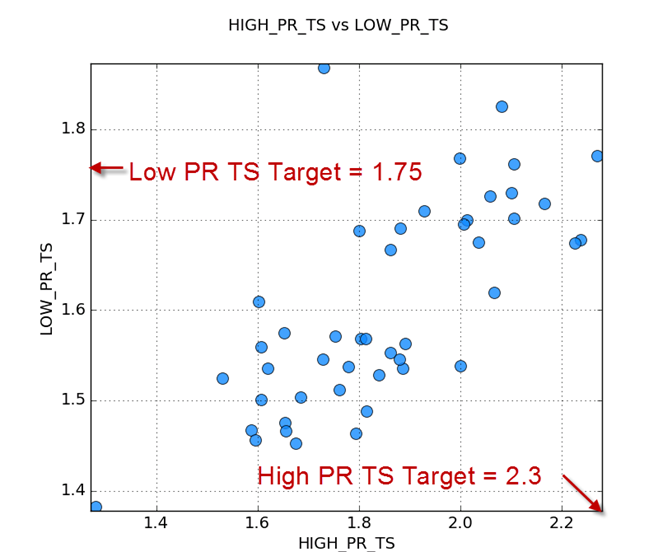 Figure 5. Scatter plot of PR TS from the DoE 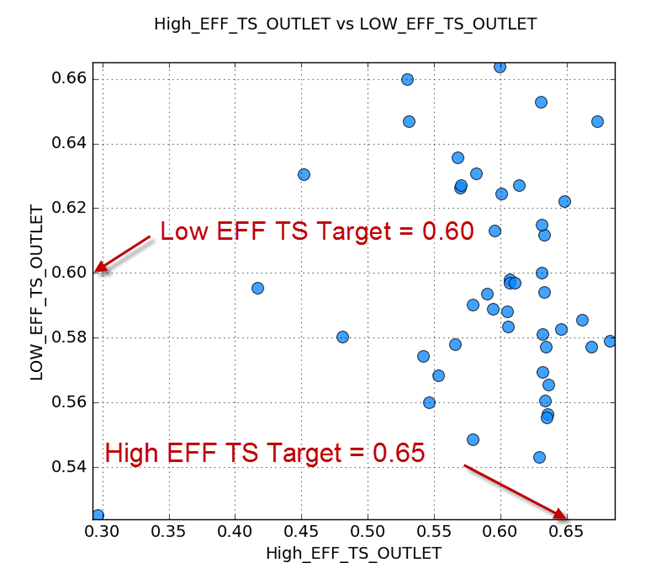 Figure 6. Scatter plot of Eff TS from the DoE

Another handy post-processing feature is Analysis of Variance (ANOVA) which uses the surrogate model to rank the percent impact of each input on a given response. The percentages are shown in a pie chart in which the size of the slice is based on the percent impact. Figure 8 shows the ANOVA analysis of PR TS at high flow. This shows that Impeller Exit Radius (R2), Backsweep angle (Beta2b), INLETDELTAR (R1t – R1H), and B2 have the highest impact on PR TS at high flow. ANOVA analysis for other responses is not shown here but the detailed analysis is given in [1]. 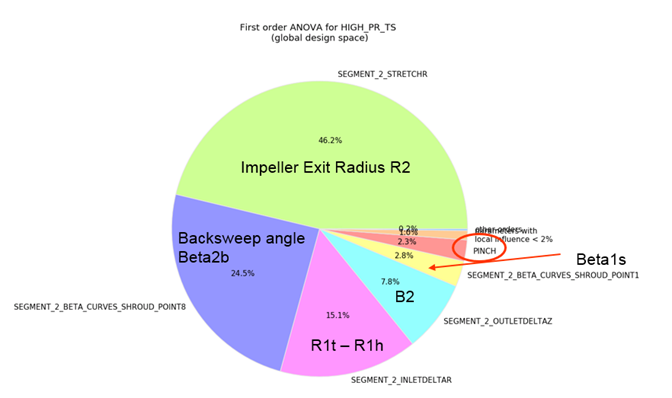 A trend of values for inputs and responses can be obtained using Self-Organizing Maps (SOM). These maps are contour plots of inputs and responses but have a unique feature – all the designs are displayed on the map (shown by small white dots) and always appear in the same position on every map. Figure 9 shows the SOM for PR TS at high flow and R2. The target value of PR TS at high flow is 2.3 and is shown in the lower-left corner of the map by a black circle. The corresponding map for R2 tells us that to achieve this target PR TS at high flow rate, the value of R2 should in range as shown by arrow on the map. SOM maps for all other responses and corresponding important input variables can be obtained similarly. These are not shown here but a detailed analysis is given in [1].

After data mining the results from the DoE, it is clear that none of the designs meet the target value of PR TS at high flow. Several designs exceed the target value for PR TS at low flow and efficiency at both flow conditions. The optimization is formulated as follows:

In addition to the constraints mentioned above, FINE/Design3D allows the user to write custom python scripts to add an additional check on the simulation results. In this project, a custom python script was written to monitor the RMS value of the global residual. Designs that fail to achieve a decrease of 3 levels of RMS residual error are marked as failed and removed from the database. The surrogate model is trained to steer away from zones of input variables that lead to simulation failure [2]. 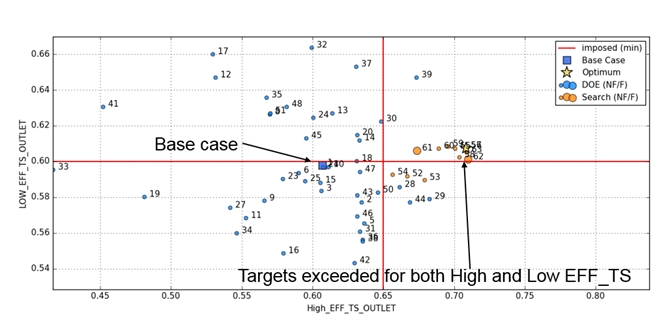 Figure 12 shows a plot of accurate (CFD) value of PR TS at low flow vs that predicted by the surrogate model during the optimization search. It can be seen that from design 55 onwards the accurate and predicted values match closely. Other responses also show a similar behavior and are not shown here.

A meridional view of design #57 (dashed lines) overlaid with the base case design (solid lines) is shown in Figure 13. The input variables that have the most pronounced changes are R2, B2, and PINCH as anticipated from ANOVA. Figure 14 shows plot of beta distribution of hub and shroud for the optimal design (dashed lines) and base case design (solid lines). Compared to the base case values, BETA1s increased, BETA1H and BETA2B decreased. The main blade count for design #57 was 6 as compared to 7 for the base case. 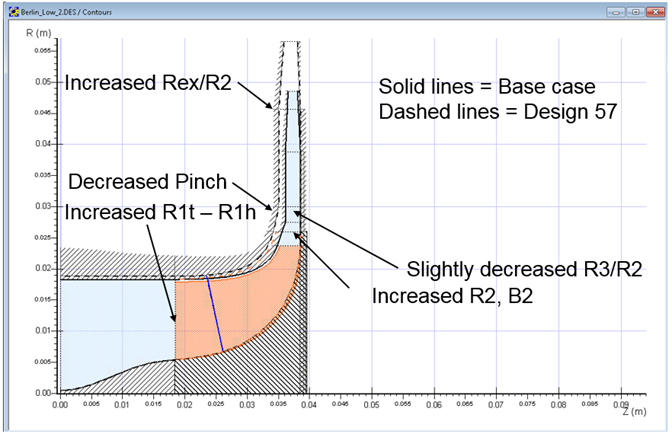 Figure 13. Overlay of contours of design #57 with the base case 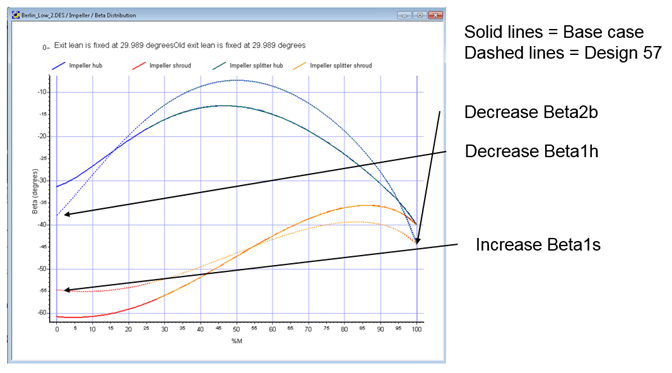 Figure 14. Overlay of BETA distribution for design #57 with the base case

A full performance map of design #57 and the base case is shown in Figure 15. There is plenty of margin on both stall and choke sides. In the realm of aerodynamic analysis, design #57 is hence acceptable. 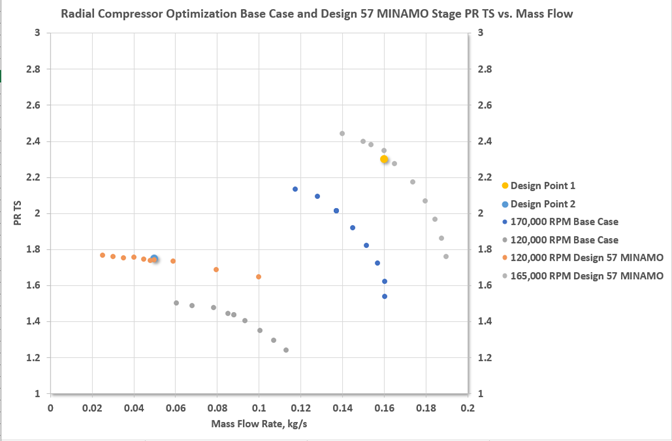 This straightforward optimization (10 inputs, 1 objective aggregated from two PR TS targets, 8 constraints) was run on a modest single Windows workstation with 4 cores. The DoE was completed in about 48 hours and the optimization search in about 12 hours. Of the 51 DoE designs only 4 failed to converge, 1 failed to generate a valid mesh. Thus, the surrogate model was generated from 46 designs.

FINE™/Design3D coupled with AxCent™ is a robust optimization software bundle with several powerful post-processing features. The ability to run the search in parallel reduces the run time to weeks (in some cases even days) rather than months. FINE/Design3D also allows for customization of the project by allowing the designer to link custom python scripts. With AxCent as a dedicated turbomachinery modeler and AutoGrid as an automated meshing software for turbomachinery coupled with FINE/Design3D, this makes a fine choice for the turbomachinery design industry.

Do you have any questions, concerns or comments? Please let us know in comments section below or contact us at info@conceptsnrec.com

The Agile Engineering System™: What is the history and where is the future?

Dave Japikse, the CEO/Chairman & Founder of Concepts NREC, discusses the integrated software tools developed specifically for the design and analysis of turbomachinery. Examples include thermodynamic...