This year's ASME Turbo Expo in Norway inspired me to tack on a vacation to explore European cities on my bucket list. Being an engineer, and student of ancient cultures, part of my trip included visiting Roman ruins in Cologne, Vienna, and Budapest. Looking at these fascinating sites and seeing first-hand their mastery of the handling of both air and water made me rethink the notion that control and distribution of fluid is a strictly modern invention.

Control of clean and waste water is certainly one of the most important technologies ever developed. This is certainly true as far as public health is concerned. The most impressive aspect was their ability to achieve effective air and water distribution without that most critical component of modern systems: turbomachinery.

The ancient Greek and Roman civilizations did have some water lifting systems. Many of these were quite ingenious and some (like Archimedes screw) could even be considered early forms of turbomachinery, but ancient peoples lacked the adequate power sources for large-scale water lifting.  Instead, they depended on gravity to move water and buoyancy to move air.

We’re all familiar with that quintessential symbol of Roman engineering: the aqueduct.  We usually picture towering arches of stone, called arcades. The truth is that such structures were only used to bridge dips in the layout of the land. The bulk of an aqueduct’s length was a canal in the ground cleverly laid out to take advantage of the terrain to provide a constant downward slope. These works stretched for many miles over undulating terrain to deliver large quantities of water to their cities and forts. 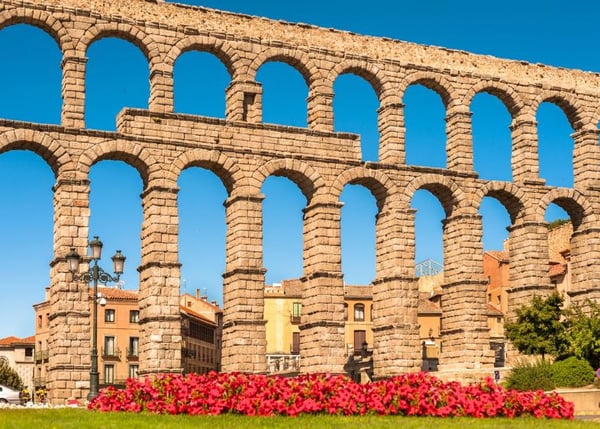 I saw some ruins from the Eifel Aqueduct, which was built in AD 80 to support the Roman city Colonia Claudia Ara Agrippinensium, better known today as Cologne, Germany. It was one of the longest aqueducts in the Roman empire. All told, it stretched for 130 kilometers (81 miles) and moved 20,000 m3/day of water all by gravity. It  was engineered to be almost entirely below ground level to protect it from freezing.

The Romans seemed to have a deep and intuitive understanding of the direct link between sanitation and public health.  Every fort and city layout had public baths, holding tanks, and fountains all delivering clean water to the population. This water could be redirected through an equally advanced sewer system to flush the waste out and keep the city clean. It's weird to think that there are cities in the world today that still struggle to deliver this basic level of sanitation to their inhabitants.

Their control of air was nearly as impressive. The Romans (the wealthy ones, anyway) had radiant heating systems on par with any modern home. Central fires provided hot air to chambers, built under the flooring that provided heated air. This air was then piped out through ducting in the walls that exhausted to the outside.

Remains of a radiant heating system under the floors at Aquincum, near Budapest, Hungary.

All these impressive works were constructed 2000 years ago with technology that might be dismissed as primitive, by today’s standards. From my perspective, the fact that they were able to achieve what they did, without access to modern technology, made their works even more inspiring. It also makes you wonder what civilizations 2000 years from now will think of our technology!