Commercial and military aircraft require that preset levels be maintained for aircraft cabin pressure, airflow, temperature, and humidity — regardless of flight altitude and aircraft speed. To satisfy these requirements, some amount of the airflow is typically removed from a bleed port located in a compressor section of the main engine, and the air pressure is adjusted to a preset level (through a pressure loss device) before it goes into the cabin. A better, and more effective, way to maintain the cabin environment over all of the aircraft’s operating conditions is to use a dedicated compressor driven by the main engine. Both the main-engine bleed system and the engine-driven compressor (EDC) need an environment control system to maintain cabin temperature and humidity.

The significant advantages of the EDC are in delivering the required pressure and mass flow over a wider range of flying conditions, without resorting to a pressure-loss device which penalizes the engine cycle. The EDC consists of a single-stage centrifugal compressor driven through an integral gearbox and is equipped with variable inlet guide vanes which can modulate both pressure and flow at the same time. An electronic control system adjusts the compressor pressure-ratio schedule to satisfy airflow and pressure demands under a wide range of ambient conditions as well as operating speeds that vary directly with the speed of the turboprop.

The EDC is currently used on turboprop aircraft by taking power off the accessory gearbox, but it could also be driven by an electric or hydraulic motor. In a main-engine compressor bleed system, airflow is typically bled from the compressor section through one or two bleed locations, and bleed pressure is approximately proportional to ambient pressure. The higher the altitude, the lower the compressor bleed air pressure. This results in both output limitations and penalties to the engine cycle as shown in the chart below. 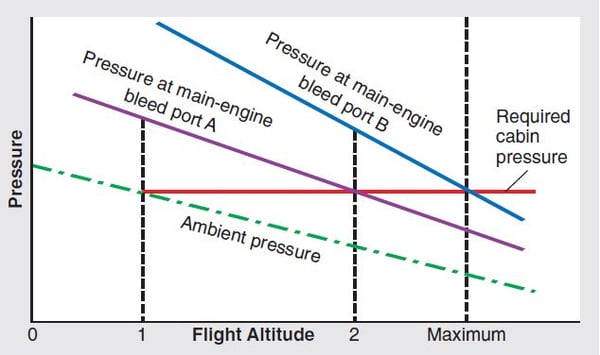 Between altitudes 2 and Maximum, air is bled from bleed port B, and its pressure is decreased to the required level. If the engine is equipped with only one bleed port (port B), the loss to the engine cycle is even greater.

Engine-driven compressor The EDC can control airflow and pressure independently. For instance, between altitudes 0 and 1, no cabin pressurization is required, although airflow is still needed at rates of 5 to 20 SCFM per person.

Concepts NREC has developed complete EDC systems for aircraft, enabling them to fly higher and carry a larger payload. As a retrofit device, the EDC was designed to be installed in the severely limited space (and hostile operating environment) of an aircraft engine nacelle. Contact us for more information.