Because of its promise as a non-polluting fuel, hydrogen is currently a very popular topic among the energy and turbomachinery communities. If hydrogen is reacted with pure oxygen, the thermal energy release is significant, and water is the only by-product. This highly exothermic reaction was used to get humanity to the moon. Of course, nitrous oxides (NOx) can be released if hydrogen is burned in air. If, on the other hand, the energy from the reaction is converted to heat and electricity in a fuel cell, then only water vapor is discharged. In addition, when pressurized in a tank, hydrogen is an easily transportable fuel, and so is desirable for transportation. 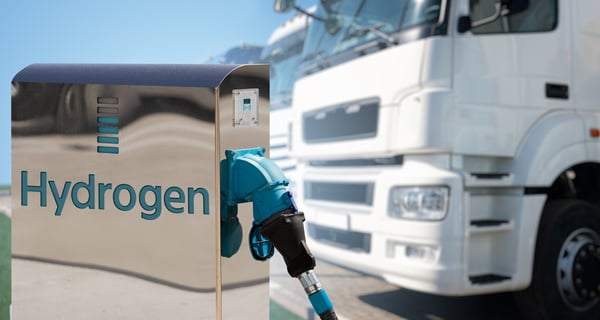 Critics correctly point out that hydrogen is not an energy source. Because it is so highly reactive with oxygen, it is very rare in its elemental form. It takes energy to produce it, so hydrogen is really an energy storage and transportation method. When considering the carbon footprint, it is important to understand the ultimate power source. Natural gas can be used to generate hydrogen in a process called steam methane reforming. Thermo-chemical hydrogen generation can be accomplished with high temperature advanced nuclear reactors, or with solar thermal power. Electrolysis (essentially a reverse fuel cell electrochemical process) can use electricity and water to generate hydrogen, and if this is done using solar photovoltaics or wind energy, then the hydrogen has no carbon footprint. Readers may have seen the “color” of hydrogen referenced, and it is the ultimate energy source that determines the color: green hydrogen is made with renewables or non-carbon emitting sources, blue hydrogen is made with fossil fuels, but the carbon is captured and sequestered, and grey hydrogen is made with fossil fuels without any sequestration.

The existing infrastructure for burning small amounts of hydrogen mixed with natural gas in gas turbines for power generation is largely in place now. Current equipment can handle up to about 5% of hydrogen in natural gas pipelines without causing embrittlement. Some advanced projects are burning up to 20% hydrogen currently. The primary impact on the gas turbine operation is in the combustor, and the rotating machinery needs no design modification for small amounts of hydrogen.

Within the vehicle, hydrogen is carried in an on-board pressurized tank, but an air compressor is needed. Range and efficiency will be critical.

Hydrogen production processes require compression. The compressors used are often driven by turboexpanders in another part of the process cycle. Additionally, turbomachinery is needed in hydrogen transportation, where boil-off gas (BOG) is created due to thermal conduction of the liquid hydrogen during transport. Compressors recompress and liquify the BOG to conserve hydrogen. It is these processing and transportation applications that represent the most immediate opportunity for turbomachinery companies.

We welcome your questions and comments here, or contact us at info@conceptsnrec.com for further dialogue.