Turbomachinery performance is almost always analyzed and tested with a fixed inflow condition. In other words, the assumption is that the inflow fluid temperature and pressure is defined and unchanging over the map of machine performance. Since varying conditions often exist in practice, the performance maps are sometimes normalized, as shown in the figure below. The pressure ratio of a compressor is plotted versus a corrected mass flow range and rotational speed. 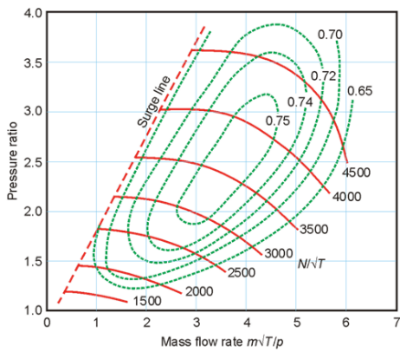 The practice of normalizing is particularly important in the turbocharger industry. Mass produced vehicles need to work in a huge range of ambient conditions and cannot be customized for every environment. Elevation, latitude, and season will dictate big variations in the inflow properties the compressor sees.

Let’s take a simple example from two fairly extreme environments: a turbocharger compressor operating in the summer in Lhasa, Tibet (one of the highest elevation major cities in the world), and one operating in the winter in Winnipeg, Canada (one of the coldest major cities in the world). The plot below shows the efficiency of a nominal turbocharger compressor for both scenarios compared to a standard day performance. Note the huge variation in mass flow for the peak efficiency point. Interestingly, the Lhasa compressor (orange) shows much more deviation from standard day (blue) than the Winnipeg compressor (grey). 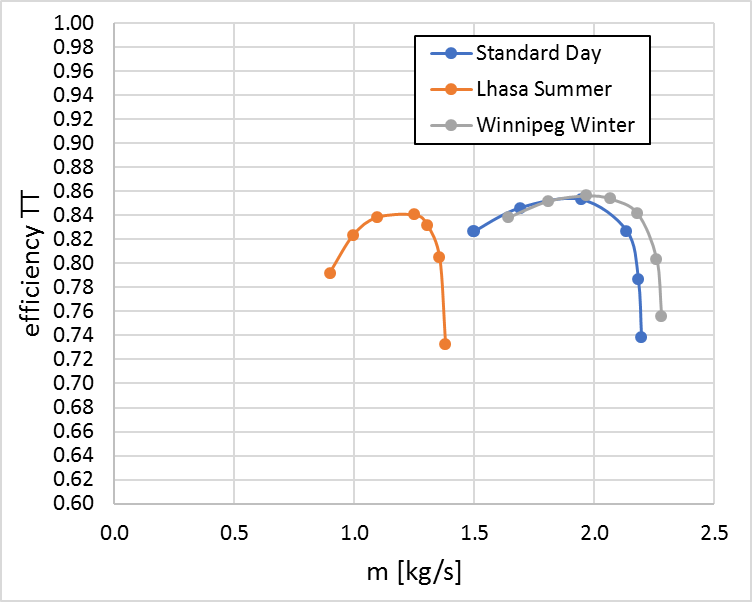 It’s interesting to note that the surface of the earth has more natural variation in absolute pressure than it does in absolute temperature, hence the more radical departure for the Lhasa compressor than the Winnipeg, from the standard day condition.

The variation in peak performance with mass flow will have a major impact on the effectiveness of the turbocharged engine. This effect can be calculated with modern engine simulation software. In order to do this, it’s necessary to account for the variation in compressor performance, which must be corrected to account for these ambient effects. The compressor is normalized by what is, basically, the speed of sound. The equation is:

The plot below shows this corrected result. 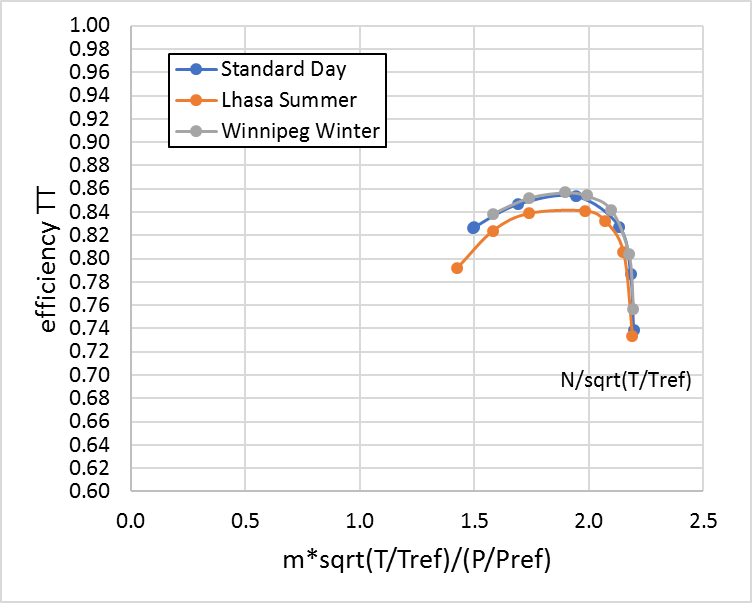 Implicit in these corrections, is the assumption of perfect gas. This is a reasonable assumption for turbocharger compressors, and most air compressors in general. This assumption would not apply to applications such as supercritical carbon dioxide, where the fluid properties are highly nonlinear. For most compressors, this correction method is a powerful tool to quantify performance for a range of conditions.

To learn more about compressors, Concepts NREC is offering a course in May: Centrifugal Compressors — Improving Design for Better Performance & Cost. Register now with code EARLYREG and save $200 off the cost of the course.