The Wright Stuff for Turbomachinery

As an engineer, you probably have at least some familiarity with the story of how two bicycle mechanics, named Orville and Wilbur Wright, invented controlled-powered flying machines at Kitty Hawk, NC. While I knew the basic story, I learned a lot more reading David McCullough’s book “The Wright Brothers,” which, I highly recommend. I could not help but make the connections to what we, in the turbomachinery industry, owe to these dedicated and industrious brothers. Their groundbreaking flight, pictured below, on December 17, 1903,  is often cited as the birth of modern aviation.

The Most Famous Picture in Aviation  - Source: Smithsonian Institution

I had always been surprised that such advanced technology could be developed by bicycle mechanics, and my original impression was that the Wrights had been quite lucky. That was not the case at all.  Although lacking formal education, the brothers, particularly Wilbur, read voraciously, particularly technical papers of the day, on flying and aerodynamics. Additionally, we must remember that the bicycle was advanced technology in the second half of the 19th century. Balancing on two wheels was almost as much of a wonder to the layman of that time as powered flight would be at the beginning of the 20th century. Also, practical mechanical ingenuity proved invaluable in all of their experimentation.

For the wing shapes and orientations on the first gliders they tested at Kitty Hawk in 1900 and 1901, the Wrights relied on lift and drag data provided by Otto Lilienthal, a German flight pioneer. The lift generated by the Wrights’ 1901 glider only produced approximately 1/3 of the lift they had predicted with the Lilienthal data. Frustrated, they began to question the validity of the data. They decided to gather their own lift and drag data by building their own wind tunnel in their Dayton, Ohio bicycle shop, using scaled cambered “airfoil” shapes. 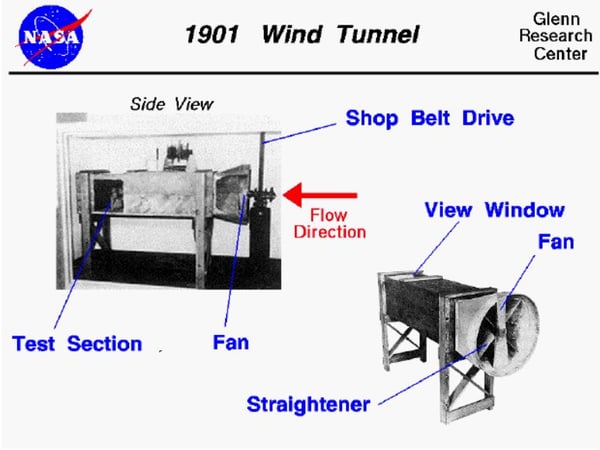 Many practices that seem obvious in modern wind tunnels were not apparent to these pioneers. For example, they placed the fan to drive the wind tunnel upstream, which required extensive flow straightening devices, which took months to develop. The cambered shapes for testing were constructed from strips of 20-gauge steel, which were available in the bicycle shop. These were cut, hammered, filed, and soldered into shape. Angle of attack was determined by observation through a side window in the tunnel, and a single balance was used to determine aerodynamic force, being deployed in cross-stream and streamwise directions separately to determine lift and drag, respectively. This exhaustive research (self-funded, no less) proved to make all the difference in developing the powered Wright Flyer that became so famous. They used the data, not just to design the wing shapes, but also the propellers that provided the propulsion. 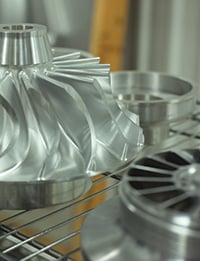 experiments performed by German aerodynamicist Ludwig Prandtl showed the advantage of increased thickness at the leading edge. In the 1930’s, the National Advisory Committee for Aeronautics (NACA), the precursor to NASA, developed a system to describe the exact shape of families of airfoils, and took exacting measurements of lift and drag coefficients, just as the Wrights had done on their less sophisticated shapes. These data from NACA are still commonly used today to design wing and blade sections. If you use Concepts NREC’s Agile Engineering Design System® to develop a blisk or impeller blade shape, you are likely using NACA airfoils, and, indirectly, the data that was so painstakingly gathered by the Wright Brothers’ wind tunnel tests. So, the next time you go out to celebrate another successful impeller design, raise your glass to Orville and Wilbur!

Here is a link to an old video done by the U.S. Navy and  narrated by Paul Garber from the National Air and Space Museum in Washington, DC. https://www.youtube.com/watch?v=CSIPgdgiecw.  It's a little long, 16 minutes, but you have to love how he keeps correcting things that were reported at that time - he MUST be an engineer!

Smithsonian blog about picture above and some of the controversy it sparked: https://airandspace.si.edu/stories/editorial/first-flight