What do Undergraduates, a Chimney, Renewable Energy and an Open Pit Mine Have in Common?

It sounds like an opening to a joke, but I wanted to share some creative thinking sparked during a field trip to a local gas turbine cogeneration plant with some undergraduate students I teach. The students were learning about basic thermodynamics, and visiting a power plant was a good way to give them perspective of what a kW is, and how much hardware and floor space is needed to generate 21,000 of them. I scheduled the trip for when the Gas Turbine system was “down for routine maintenance”, so the students could really crawl in and around the “beast” and be able to hear the explanations of the tour guide.

Before the trip, when students asked for the address of the power plant, I said, “Just look skyward for the tallest cylindrical structure, the chimney, and head straight for it.” It worked, and they all arrived on time. While we were gathering outside, one creative student suggested that they should install a wind turbine on the outside of the tall structure to generate more power. Interesting enough idea, but then we started discussing installing a “wind” turbine inside the chimney that would be powered by the exhaust gases from the gas turbine engines.

This simple, creative thought sparked a research project back in the classroom. We discovered that there is precedence to place a turbine at the exit of a chimney to produce power, but there was an interesting twist. Researchers used solar energy to heat the air that drafted through the chimney.  The solar heat energy changed the density of the air enough to cause a very reasonable draft. This draft would create substantial velocities and a healthy pressure of 10-15 inches of water column (in.wc) to enable an efficient exhaust turbine to recover power.  There have been several prototype field demonstrations of such “Air Chimney Power Systems” in China, Spain and Australia with power ratings of 100-500 kW.

However, the same search quickly discovered the major impediment to commercializing these Air Chimney Power systems: size, and thus, cost.  In order to generate utility rated power, i.e., at least 1 or 2 orders of magnitude above the prototype ratings, the chimney must be 750 to 1,200 ft tall, and have diameters of 10 meters. Building such a free-standing tower would be very expensive.

How can this expense be avoided and still enable an Air Chimney Power System to be deployed? The answer came during a creative brainstorming session where we tried to “think the opposite”. If the problem is the cost of raising the air power chimney into the sky, then perhaps putting the air chimney into the ground is a solution.

A quick literature survey of “…natural and man-made phenomenon” of deep holes in the ground led us to man-made Open Pit (Ore) Mines such as shown in Figure 1. Such mines are often 3,000 ft in diameter and 2,000 ft deep. The operation of an open pit mine requires electrical utilities to be in place as well as some homesteads to be established near the site for the workers. From the sky, these open pit mines appear to be inverted soup bowls, perfect for capturing solar energy.

Open pit mines can usually operate for 50-60 years until the ore is either depleted or too deep to safely and economically mine. Potential problems can arise when an abandoned mine is not properly remediated. They can become superfund cleanup site after the mine accumulates ground water that mixes with the mining chemicals and leeches into the groundwater. That’s when preparation meets opportunity or what an engineer calls a “productive day”.

These mines represent an opportunity for installing a solar-powered Air Chimney Power System. The cost of a single 1,000 ft high tower is eliminated by using many smaller, modular air chimneys, each about 200 ft long and built in transportable sections of only 1 or 2 meters in diameter. Rather than needing each air tower to be self-supporting, and thus very expensive, each tower section can be supported by the roadways. These roads, called berms, were carved into the sides of the mine to enable trucks to carry the ore out of the mine.

In our scenario, only half of the internal surface of the mine would need to be fitted with the air chimneys, leaving the other half to be populated with concentrating mirrors. The concentrated light would shine on a heliostat, as shown in Figure 2, and this solar-powered system could generate power at relatively high efficiencies. The ambient air, that is used to cool the condensers of the Solar Rankine cycle system, can, yes, you guessed it, be the natural draft through the Air Power Tower. This is like the hyperbolic cooling towers that have become the iconic symbols of Utility Power Generation facilities.  Although the Air Power Tower achieves only 2-3% cycle efficiency, that efficiency is still very comparable to the Ocean Thermal Energy Conversion systems that have been touted for many decades as viable. 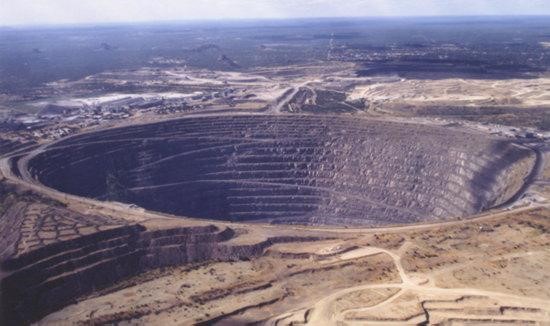 Of course, to achieve the highest conversion efficiencies possible, it is necessary to have the highest efficiency wind turbine, otherwise known as a high-speed, radial fan. Think along the lines of a jumbo jet’s turbofans. Concepts NREC, known for its expertise in designing high efficiency turbomachines and conceptualizing new and novel energy recovery systems, would be a great match for someone trying give an open pit mine a second life as a Solar Energy Power System, rather than a Superfund Cleanup Program.

Of course, it is always a good idea to count the number of students who enter a 21 MWe Power Plant, just to make sure the same number of students safely exit the facility. It would be easy for them to get lost in the waste heat recovery plenum, where they would not hear the call to leave.

If you enjoyed this blog post, Frank will be presenting a webinar:  A Review of Organic Rankine Cycle Systems for Power Generation from Waste Heat Sources on Wednesday, May 8, 2019 at 11:00am EDT. To register, please click here.