The 2018 ASME Turbo Expo in Lillestrøm, Norway was, as always,  a smorgasbord of papers and presentations on the latest and greatest ideas in turbomachinery and gas turbines. Two of our favorites were from Mark R. Anderson and Felipe F. Favaretto, Concepts NREC employees. Coincidence? I think not. Felipe presented, “Development of a Meanline Model for Preliminary Design of Recirculating Casing Treatment In Turbocharger Compressors”:

ABSTRACT
Recirculating casing treatment is a feature frequently adopted in automotive turbocharger compressor design to extend its operating range. In the low flow region of the map, surge margin can be enhanced by bleeding a fraction of the main flow from the impeller casing back to the stage inlet. In the high flow region, choke margin can be improved by bleeding flow from the stage inlet to a location downstream of the impeller throat. The benefits of recirculating casing treatment are more prominent at higher rotational speeds and are usually accompanied by an associated penalty in efficiency, which may or may not be acceptable. The challenge posed to the designers is to create a recirculating casing cavity configuration which enlarges the map width, while minimizing its impact on efficiency.

In the lack of specialized meanline tools, early stages of recirculating casing cavity design are mostly reliant on results from expensive CFD runs or test data from existing designs, if available. This paper presents the development of a meanline model suitable for preliminary design. The model was compared with CFD results for an automotive turbocharger compressor. The authors believe the proposed model can be a valuable tool for reducing development costs in the preliminary design stages of recirculating casing treatment configurations.

ABSTRACT
Preliminary design of a turbomachinery stage usually begins with target flow states, represented by a velocity triangle. Guidance for these target velocities comes from a variety of sources, which include some physics-based rules but, more often than not, have a significant empirical basis.

The best-known guidelines for axial designs are the so-called “Smith Charts”. This approach was documented in detail by Smith [1] and quickly became a preferred approach for initial design of axial turbines stages. The method was based on a significant set of test data for various turbine designs, corrected for complicating factors, such as various clearance gaps and so on. Similar, but less well-documented methods, have been developed for axial compressor design. Despite the widespread use of the Smith chart method, these approaches have a very limited substantiation and no clear pedigree. Most attempts to develop Smith-like charts for compressor design guidance are based on fairly simplified models that carry significant unknowns, particularly at high loading.

This paper details the development of new Smith charts for axial compressor designs, by making extensive use of optimization techniques. Profile designs are optimized for a range of target flow coefficients and work coefficients. The result is a performance map, representing the maximum possible performance for a given set of coefficient values. The analysis was limited to 2D profile design (quasi-3D analysis) and a reaction of 50%, the theoretical ideal reaction rate for 2D flow.

Using the newly developed maps of maximum performance potential, the accuracy of various modeling methods is examined, along with their ability to determine the optimum design condition. Improvements to profile loss methods, based on the new data, are suggested.

ASME will have the full papers available for download in the near future. Check the Technical Papers section of our website for more information as it becomes available. If you want to discuss either topic more in-depth, contact Concepts NREC at info@conceptsnrec.com.

The exhibit area was filled with various vendors, including our partner NUMECA International.

Our booth included a homage to the local artist, Edvard Munch, and his painting, The Scream, which could (also) be seen at the National Museum in Oslo. The picture was a big hit, and lots of people stopped and took a picture. 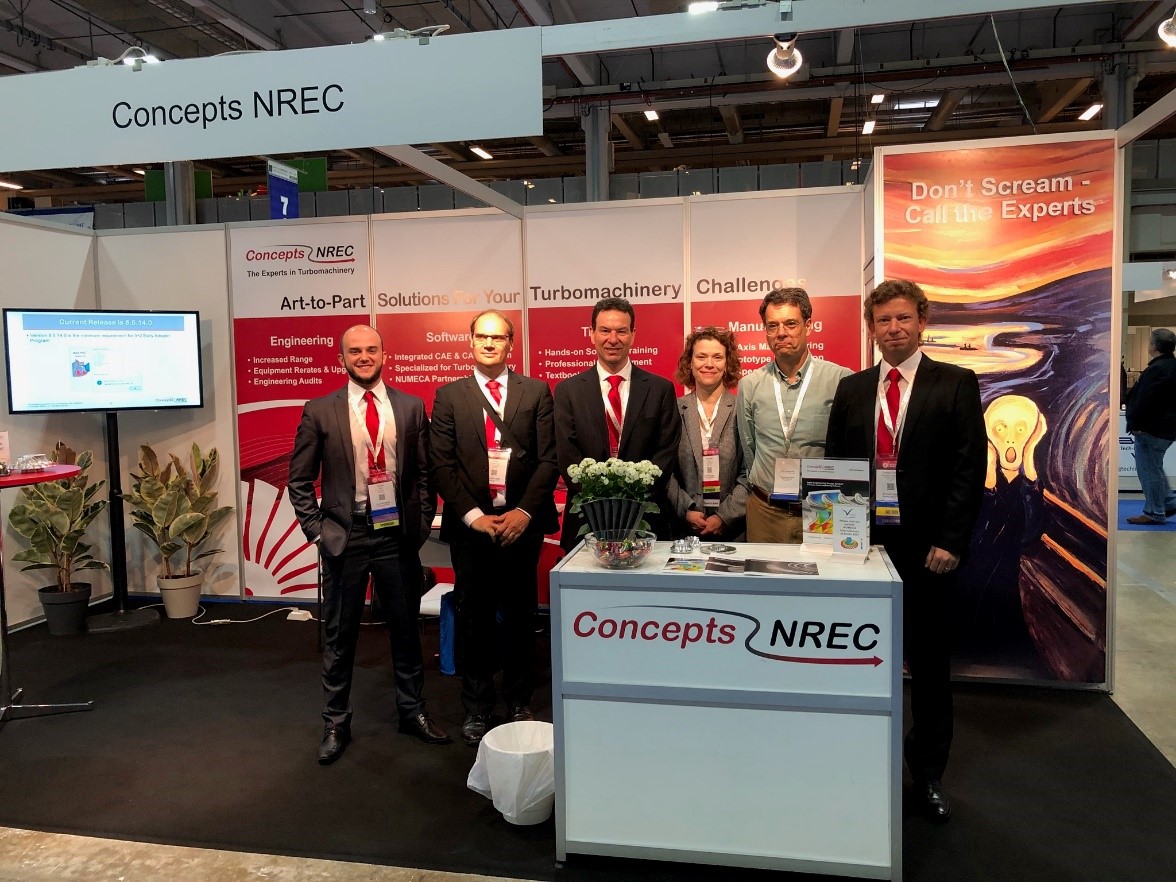