I am fascinated by ancient cultures. After my recent visits to Roman ruins in Central Europe (see  A Turbomachinery Engineer's Summer Vacation), I began to wonder how far back mankind’s mastery of air and water handling actually went.  Turns out, quite far. So far, in fact, that it goes back to the very origins of civilization, and was perhaps, even a necessary precursor of civilization.

We can find ingenious methods for water handling all the way back to ancient Egypt and Mesopotamia.  This is not surprising since both civilizations developed in arid climates and became highly dependent on irrigation.  The first real technology for water handling (beyond the clay pot or the goat skin) was the shaduf.  The device is basically a container on a long pole that is levered on a stand with a counterweight on the other end.  It could be setup easily and cheaply near a water source.  It was very effective in transferring decent amounts of water to modest levels of height on the order of 1-3 meters (3-9 feet).  The 3000 year-old figure below from an Egyptian tomb painting shows the basic idea. 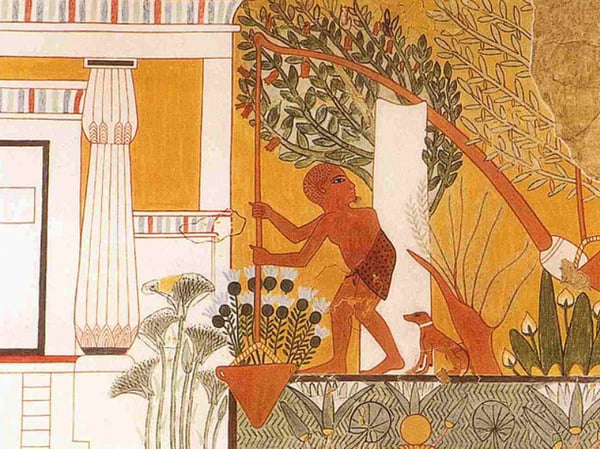 An Egyptian man using a Shaduf.  From the Tomb of Ipuy at Deir el Medina, Egypt, 13th century BC.

The shaduf definitely had its limits.  Not the least of these was the fact that the device did no real work and was totally dependent on human power.  The shaduf basically distributed the burden over the body by splitting the upward lifting and the downward pulling work.  It also allowed more powerful muscles a larger role which reduced fatigue.   The net effect was to make the work slightly less backbreaking.  Although it seems simple to us, it was also too complicated to hook to livestock and free up human labor.

The shaduf can still be found in Egypt today, more than 5000 years since its first appearance there.  It’s simplicity and ease of construction from readily available materials keeps the shaduf alive in places where human labor is readily available and other resources are scarce.

The Egyptians were a very conservative people who prided themselves on the timelessness and permanence of their society.  It would take many, many centuries before the more free-thinking Greeks came up with a more innovative and improved idea.  This development will the topic of my next blog.

An Assyrian man using a Shadfu.  Palace of Sennacherib in modern day Iraq, 8th Century BC.

How does the shaduf relate to modern turbomachinery?  The device is obviously far removed from modern pumps, but it does represent the first attempt to use technology to distribute water on a large scale.  The limiting factor was the power output that one human could bring to bear rather than any fundamental design flaw.