Zero swirl at exit of such stages is often desired design property, but some turbine applications and sub-stages of Velocity stages may require substantial negative swirl in order to amplify reduction in radial size and increase in blade heights.

To start a preliminary design of a turbine some common rules are often use based on use of flow and loading coefficients (Cm/U, deltaHtt/U^2 in Smith charts), or flow coefficient and stage adiabatic velocity ratio (U/Cs), however these charts/relationships typically are not accommodated for low reaction stages with  arbitrary swirl.

A simple set of rules is presented below, which may help in setting sensible preliminary design of zero reaction stages, including velocity stages: 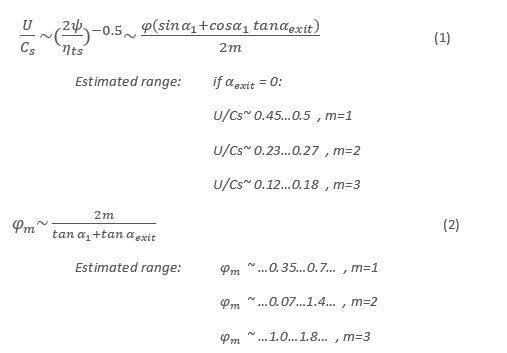 For a typical value of flow angle at the 1st nozzle exit  selected at 75 degrees from meridional direction, using (3) and (4), the absolute and relative exit flow angles  can be estimated:

The above relationships assume that radial size (i.e. rotation velocity) and meridional velocity are the same for all blade rows.

An example of single rotor stage design with convergent-divergent supersonic nozzle, executed via optimization can be found here:

Using data from that case (it reports reaction about 3%, supersonic rotor, labyrinth seal and meridional nozzle-rotor gap leakages, ~ 45% admission), vs above estimations (assumption of zero reaction): 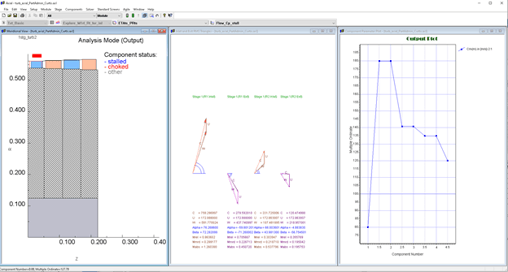 The suggested relationships give a reasonable estimations of U/Cs (or loading coefficient, if estimated t-s efficiency is known) and flow angles, sufficient to set size and construct initial geometry of low reaction stages, including velocity stage configurations, with arbitrary target swirl at exit.

If you have any questions or comments, please let us know in the comments section below or contact us at info@conceptsnrec.com.